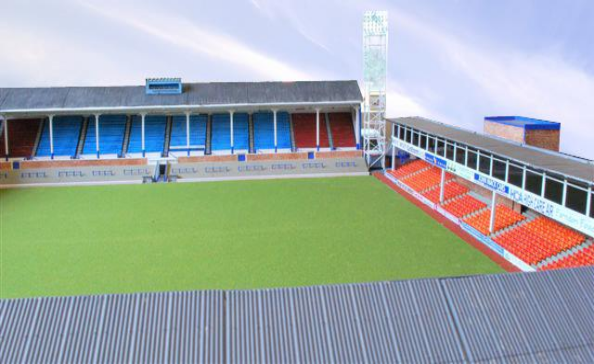 The Main Stand was built in 1921 and is lower than the end South Stand but had a modest dignity all of its own. Most noticeable is the `Pigeon-Loft' Box on the roof that housed TV cameras. It had extra lamps perched along the roof. The most interesting feature was the mock-classical podium built behind the players' tunnel. The tunnel was formerly like a courtyard, extending the full width of the podium with two windows on each side of the entrance until the installation of more seats ruined its grand effect.

Otherwise the stand is relatively unremarkable; with solid screen ends, a small front paddock and blue and white paintwork. The seats and benches are a mixture of colours and therefore deny the stand any uniformity. It was quite difficult to model this stand as there are a lot of internal girders that will never be seen. It was built mainly from balsa wood and plastic and took two months to complete. Sixteen individual roof trusses had to be made to carry the corrugated roof panels; seats and benches had to be individually installed. 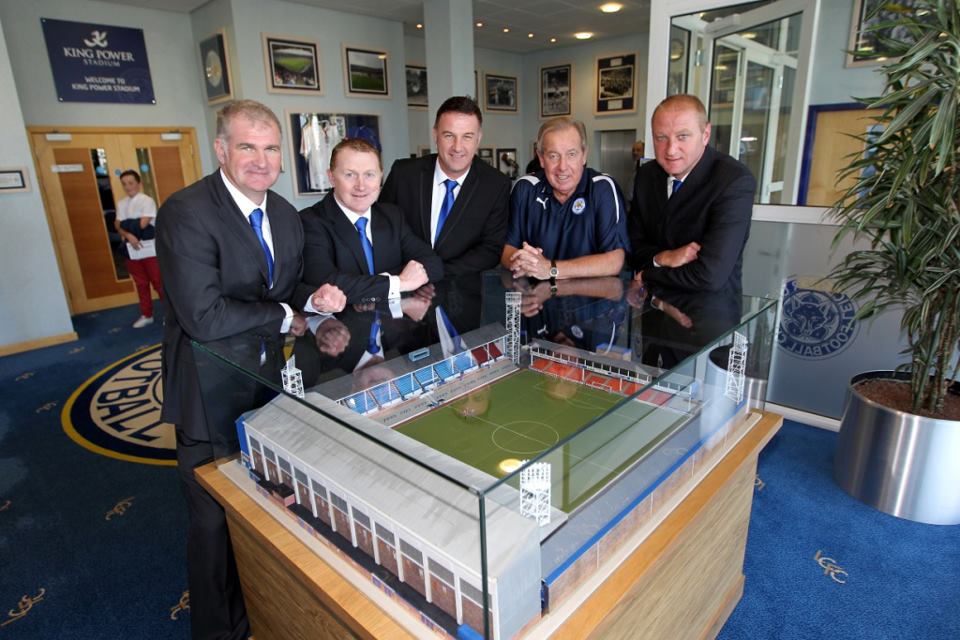 The Double Decker/Spion Kop, the most imposing of the four stands that make up the pre-1993 Filbert Street Stadium was designed and built in 1927 by W.J. Cearns of Stratford at a cost of £30,000. This was a real challenge to model. The bottom tier (the Spion Kop) was the first part to be manufactured. It is mostly a plastic construction with the rear walls made out of 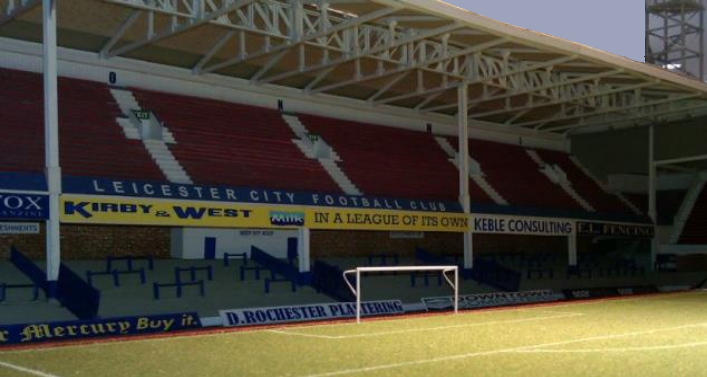 10mm balsa wood. There are over forty crush barriers which all had to be made by hand with each one taking fifteen minutes to make. The terracing was made of balsa wood with plastic strengtheners. A large amount of roof trusses were required and also a big centre girder which started life as an OO Gauge signal gantry. The centre main girder has to take a massive amount of weight and you can easily see what clever chaps those old engineers were. The more trusses that were used the more rigid the roof section became until it was strong enough to hold three house bricks without any problems.
The upper tier was again a mixture of balsa and plastic profile. Luckily the seats are the red bench type that were used up until the mid-Eighties when tip up seats were installed. Eight holes had to be cut out of the terracing for the entrance/exit stairwells and lots of detailing and weathering were needed to give it an authentic look. The roofing sheets are made of corrugated plastic sitting on top of a thin membrane of balsa wood.

The rear of the Spion Kop is covered in graffiti as it was in the Seventies. Look out for some of the "names" that used to stand on the Kop like Click and Bruin. The gates and turnstile blocks are as accurate as I could make them given that good photographs of this era are very hard to come by. The rear windows are printed on to card and made to look "mucky" by using Photoshop. The seats where the Main Stand joins the Double Decker were very difficult to reproduce and took a few dummy runs to get it to look right and I am quite pleased with the outcome.

The Filbert Street End lost its roof at the end of the 1974/75 season to be replaced with the Executive Boxes. Only four boxes were built for the start of the season with another sixteen being completed during the year. Modelling this part of the ground was quite a challenge too. The seats sit on terracing which was made from plastic box section and painted wiith conrete coloured dye. Boxes were built on a platform of balsa wood, the windows were made from brown-tinted acrylic with fine plastic strips for the window bars etc. The roof is box profile plastic sheet which is painted with a steel coloured paint. The signage is made out of 1mm styrene with the printing produced on a computer and printer using Coral Draw to generate them. The existing roof was kept and modelled using plastic corrugated sheet. The Captain's Restaurant was built using card, styrene and brick papers. Again all the correct turnstiles and gates are used and in the corner the famous white turnstile block has been painstakingly reproduced in 1:100 scale.

It is complete with an iconic LCFC flag that mysteriously disappeared in halcyon days of yore! Also in the corner are the toilet blocks that look as ‘inviting’ as ever. If you look closely you can see the fire escape leading out of the Executive Boxes.In the opposite corner is the Supporter’s Club Enclosure which leads onto The Popular Side/East Stand. This stand was the least inspiring part of Filbert Street and modelling it didn't pose too much of a challenge and was finished within a few weeks. Terracing was the usual combination of balsa wood and plastic with plastic tip up seats for effect only. The roof was manufactured with lots of roof trusses and corrugated plastic sheet. The only problem was making sure that it joined flush to the other two stands which luckily it did.

The floodlights were installed at Filbert Street in the summer of 1957 and completed by 23rd of October when Borussia Dortmund were the visitors for a friendly fixture to celebrate the switching on of the lights. City won the game 1-0 with a goal from Willie Gardiner. Although it may look a bit tricky modelling, the lights was quite straightforward. Plastic box section was used for the main construction, with plastic rod for the brace bars. The lights are made from small squares of plastic with 3mm rhinestones for an illuminated effect. Rhinestones are used widely in the making of jewellery and I think they give quite a good effect. The two towers at the Filbert Street End are 14" high and I believe look a good representation of the real thing. The two towers on the Double Decker are only 5" high as they are fitted to the stand roof. All four towers are complemented by the installation of walkways and ladders.